After the heavy rains in the last quarter of 2020, the tobacco growers of Pinar del Río were able to trace the planting and comply with the agreement 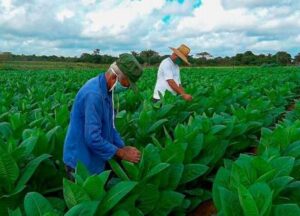 The campesinos from the backcountry fulfilled the plan of 15,800 hectares (ha) of tobacco for the current campaign. In fact, they have planted more than 16,189 ha and continue planting in response to a commitment made with the country’s leadership.

According to Virginio Morales Novo, agricultural specialist of the Tabacuba group in Pinar del Río, more than 6,360,000 cujes have been collected, for 85 percent of the plan to date.

A total of 102 selected and 13 micro-selected with around 3 400 workers are engaged in the benefit of the aromatic leaf and reach 2 445 tons. Since the end of December, more than a thousand workers have been incorporated into this work.

Morales Novo specified that Virginia tobacco shows an optimal controlled cure, as well as the covered one, which cures one part in a controlled way and another through traditional ways.

“From an agrotechnical point of view, the most worrying thing is the drought. The pests and diseases so far have not caused damage, only a slight and isolated presence of Blue Mold is reported, but controllable, “he acknowledged.

In this regard, in recent days an alert was issued due to the existence of favorable conditions for the development of this tobacco disease from the second half of this month.

The Department of Plant Health of the Provincial Delegation of Agriculture indicated extreme vigilance in all areas and comply with sanitation and treatment measures as soon as possible, demolish the seedlings that have concluded their exploitation, guarantee protection with treatments of protective fungicides, mainly in seedbeds and covered tobacco, preserve systemic fungicides for areas where Blue Mold foci appear and clean up immediately when the case arises.

Morales Novo said that “this is a very strong campaign, difficult due to limitations and the late start of planting, but thanks to the efforts of everyone, especially the producers, good results have been obtained.”

Added to wishlistRemoved from wishlist 1